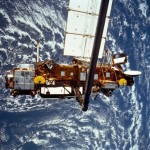 The UARS, Upper Atmosphere Research Satellite, will be crashing to Earth sometimes on September 23, 2011.  The government would have you believe it was decommissioned in 2005 with it’s orbit allowed to decay.  In reality top secret sources reveal that it was not an atmospheric research satellite but rather an atmosphere alien vessel tracking device employing ultra top secrete NSA technology.  It is well known in covert circles that various alien races roam our skies with various clandestine agendas that may have nefarious ends.  The satellite was a tool to track the space ships and study them in the hopes of thwarting the aliens agenda.

Unfortunately the Greys from the Gliese 581 star system discovered they were being watched and fired a photonic pulse disrupter at the satellite disabling it’s senor array and knocking it out of orbit guaranteeing it’s ultimate demise.  This was message sent by the little grey men not to mess with them.  Naturally the mainstream media is keeping this a secret as it does with all alien news.  Clearly they wish not to cause panic among the easily petrified public.

The UARS Satellite is expected to break in to hundreds of pieces as it plummets to Earth in a fiery blaze of hell ignited by our protective atmosphere.  Although most of the debris will burn up in the atmosphere while the odds are slim the rest will hit any populated areas.  It’s expected to totally miss the North American continent.  Look aloft in the autumn skies to witness the glowing trail of iridescence which will herald the commencement of the colorful and magical fall season.

UPDATE: The UARS Satellite ultimately crashed into the Northern Pacific Ocean at an unknown point although our sources have found reports by various Mermaids that they found debris among their under sea cities.  There are also a few reports of minor damage to building but no injuries.