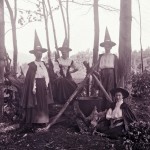 Autumn is now upon us and various Wicca and pagan forces are afoot due to the paranormal power of the Autumnal Equinox heralding in the mid-harvest holiday known as Mabon.  Mabon is the first shot sparking the yearly battle between good and evil that takes place on Halloween.  This showdown is signified by the equal amounts of light and dark in our skies during the equinox.  Be advised covens of witches, warlocks, and Pagan priests will be lurking about the various forested areas holding sacred Mabonic ceremonies.  Many times in naked form as prescribed by their ancient ways.  So don’t let your kids run off into the woods alone.

Some of these witches are good, and are celebrating the start of autumn and the gifts of the harvest provided by Mother Earth and the various Goddesses and Gods.  They’re also marshaling their forces of the light for the upcoming Halloween season.  There is also a fair amount of evil witches, and warlocks partaking of sinister ceremonies which may include animal and even human sacrifices as they pay homage to demonic forces and even a few nefarious Gods and Goddesses who choose to side with evil.  Whether the ceremonies are of goodness or evil, they can happen during the day or at night.  Although the witching hour of Midnight is generally the most popular time to hold Mabonic rituals, especially for the forces of evil now marshaling their forces of darkness for the up coming horrors of Halloween.

We advise steering clear of wooded areas until after Halloween due to the magical activity and supernatural skirmishes that take places between witches, warlocks, Pagan Priests, wizards, sorcerers, and a plethora of other beings.  In general from this point onward all supernatural activity will increase until Halloween.  This includes vampires, werewolves, poltergeists, demons, zombies, and more!