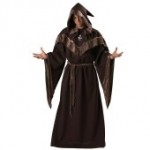 The malevolent forces of magic marshal forward marching toward the ultimate witching hour on All Hallows Eve.  Our latest paranormal intelligence, brought to you by our supernatural agents under deep cover within key bastions of preternatural evil, clearly paints a picture of increased Warlock activity.  Generally Warlock’s work alone in their quest to perpetuate evil through their dark magics.  However this Halloween season we see many a dark coven forming in continents all over the planet plotting together in a nefarious bid to resurrect ancient demonic evils.  The Warlocks aren’t bothering with Gods to focus their black magic, but rather calling upon various demons to exact their revenge on a human based planet of goodness that they loathe with an ever loving passion.

As an average human there’s not much you can do if targeted by a Warlock.  Either as an instrument of cruel amusement, an act of revenge (some will hire greedy warlocks to vanquish vendetta’s), or most likely for use in a ritual sacrifice.  Your odds of being decimated via demonic sacrifice is never greater than within the 13 nights of Halloween.  Despite the fact that they operate in and around the Midnight witching hour, a key temporal focal point of pure evil, they can kidnap or bring violence against their victims at any time.  Although since they’re still human, at least biologically, they need a fair nights sleep which would be during the day for them.  We suggest being on alert for shadowing figures who give off that certain special sinister serial killer type vibe.

Since the vast majority of Warlocks are male, the majority of their victims tend to be female since they utilize their magical charms to seduce women into their wayward web of wraithy horrors.   So we recommend women be on extra alert, and be wary of male strangers.  Particularly ones who seem too good looking, and charming to be true.  In reality they use their dark magic to cast a lustful spell upon you, and cast a glamour upon themselves to change their appearance in a positive way.  In reality they are probably ugly and have a loathsome personality.  Ladies please be especially wary in the night time hours at various social centers such as taverns, and night clubs.  These filthy fiends prowl such places for their victims.  During these uncertain and turbulent nights of Halloween terror we highly suggest simply staying in after dusk.  Not only for the Warlocks, but all the other ungodly creatures and magical mayhem that is running rampant in the streets of innocent communities all around the world!

If you refuse to change your lifestyle, and give in to these paranormal panderers, then we implore you to seek out masters of metaphysical magics such as a good witch, wizard, or even sorcerer.  Just check your local yellow pages under “Witches”.  You can also try contacting your local paranormal investigation firm for information on where to find the wonderful wielders of magic.  Once under the protection of such a paranormal professional you will gain access to protection spells, and talismans.   Of course you may find such magical artifacts at your local magic shop along with witchcraft spell books.  However only a professionally trained witch, or other paranormal practitioner, can give it the maximum power needed to deal with the dark denizens of destruction that clamor to corrupt your very immortal soul!  We wish you safe passage into the murky depths of the nefarious night, and pray you don’t fall prey to the long flowing dark cloak of the wretched Warlock.