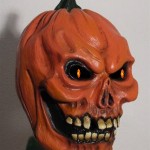 Be on the look out for a pumpkin demon.  Yes we actually said a pumpkin demon.  It seems a demon was able to cross over from the 5th dimension with the help of some nefarious warlocks.  For whatever reason they held some demonic ritual in a pumpkin patch, and the demon possessed a pumpkin.  He then grew into a monstrous orange humanoid form with a pumpkin skull.  The monstrous pumpkin demon hybrid has glowing orange flames for pupils, and disgusting rotted teeth.  He stands about 7 feet tall, and has what would be called a medium build.  Although his strength is quite supernatural along with his various demonic powers which include flight.

The wicked Warlocks brought him to life in the hope that he will be the evil leader of Halloween since there’s no official leader like Santa Claus is for Christmas.  The Pumpkin Demon has already wreaked much horrific havoc across the planet.  This filthy fiend can appear in sunlight but prefers the moonlight, and black voids of the night.  If you spot him then run for your life, and contact your local paranormal professionals immediately!  Common religious repellents such as holy water, holy fire, and crosses should repel this living jack-o-lantern menace.   Let us hope he does not succeed in unifying the forces of evil, and shroud the Earth in eternal darkness!

UPDATE: The Mystic Investigations team was successful in neutralizing this most dangerous demonic force.