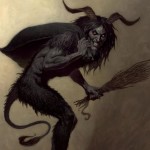 Krampus is an ancient demonic looking beast conjured by dark magics in an effort to combat the white witches celebration of Yule, and the Winter Solstice.  He almost appears Devil like with large horns, glowing red eyes, and black, or white fur.  He changes color depending on the person he’s harassing or hunting down.  As Christianity, and Christmas began to dominate the winter time religious consciousness of the planet he became one of a handful of Anti-Claus’s.  The true Anti-Claus is Saint Nicholas’s, aka Santa Claus’s, evil twin brother Claude Claus.  Eventually Claude formed his own holiday of Dark Christmas, and had a showdown for power with Krampus, and the others.  Krampus eventually became the right hand man of the Anti-Claus as they terrorized the innocents who reveled in Christmas.  They also rewarded the evil who did their part to marshal the greater forces of darkness to counter that of the Christmas light.  However Krampus had an inbred urge to feed off evil that comes from innocence so he would often scare, swat, and kidnap naughty children.  He often sucked most of the bad energy away from the kids thereby inadvertently setting them on the path of good behavior.  Thankfully the good innocent children have built in magical protections from paranormal physical harm but of course they can still be deeply frightened.

At some point centuries ago Krampus was magically bound in silver shackles by Santa Claus, and a coven of Enochian Angel magic witches.  Shackles that eventually rusted over the ages due to the pure evil of Krampus.  Since Santa is a man of peace he could not bring himself to exterminate Krampus nor jail the eternal dark beast.  The tales of Santa traveling with Krampus, and directly utilizing him to punish kids is false as well.  Many of those stories mix him up with his twin brother the Anti-Claus who would often impersonate Santa Claus in order to give him a bad name.  However as Krampus roams the Earth he is allowed to scare exceptionally naughty children, and malevolent adults.  The total opposite of the Anti-Claus’s mission.  For this is better than sitting in suspended animation which will occur if he doesn’t fuel himself by instilling fear in those with dark hearts or even out of control mischief.  That is the extent of his power.  The only physical harm he can bring to anyone is a pathetic swat from his bundle of sticks he carries with him!  He may also temporarily kidnap really bad children in a sack just to frighten them.  His lack of threat to good people is why we never bothered issuing a warning on this despicable denizen of darkness before.  Naturally this severed his ties with the Anti-Claus who saw him as useless at that point. 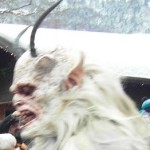 superior power of darkness who was able to release Krampus from his shackles thereby freeing him to cause havoc.  Since the real Demi-Demon Anti-Claus was absorbed into the Devil’s body on Halloween at the First Battle Of Armageddon it was thought the Devil might actually take over Dark Christmas.   However he saw it as being beneath him so he decided to make Krampus the new Anti-Claus.  Now Krampus is free to go after anyone, and you can bet he will follow the Devil’s commands to try to destroy the Christmas season as he desperately wants to be the permanent Anti-Claus.  In reality Krampus will be a threat until he is bound, captured, or extinguished.  The original chains he was bound in were forged by Angels, and need to be found in order to bind him again.  Most likely the Devil has hid them since only an Angel of Heaven would have the power to destroy these mystical chains.

Since Krampus is demonic in nature various religious artifacts such as holy water, crosses, crucifixes, Bible’s, etc will ward him off.  Although you must believe in their power, and not be evil in nature.  Naughty kids however still have the innocence of childhood in them, and these items will work for them whether they believe or not.  Since his origins are bred in dark magic white magic can counter him as well.  Especially Enochian Magic.  We recommend staying indoors on Dark Christmas December 26th since this is the day of the year dark practitioners of magic from around the world marshal the forces of evil in support of the Anti-Claus in an effort to counter Christmas. Especially at the times when the sun has not risen in your area.  12:00 AM to 4:00 AM will be the the most dangerous times since these fall within the Witch’s and Devil’s Hours.  The Spirit Of Dark Christmas will actually be more powerful this year than any other because the black magic, and dark thoughts of the deranged, will not only be channeled through Krampus but the Devil as well.  Merry Christmas, and may God have mercy on your soul…unless you’re evil then you’re probably all excited about this!  How dare you even read our page you Krampus Devil lovers!