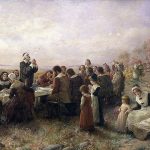 Famine, disease, and death had nearly overwhelmed the European settlers, known as the Pilgrims, at Plymouth Rock, Massachusetts. Thankfully a happy Thanksgiving feast courtesy of a successful harvest was celebrated with local Native Americans in 1621.  This turnaround in the Pilgrims fortunes was thanks to the Indians who shared their knowledge of how to cultivate corn, extract sap from maple trees, catch fish, and avoid poisonous plants. Unfortunately this isolated goodwill between the Europeans and the Indians was short lived as evidenced by the long bloody brutal history between our two peoples.

The atrocities were more widespread among the Native American people who suffered greatly as their ancestral home was ripped away along with the eradication of their way of life from the North American continent.  The millions of Indians dying horrible deaths along with the injustice wrought upon Native Americans as a whole creates a plethora of restless vengeful ghosts and spirits out for justice!  There’s even reports of deadly Indian poltergeists afoot! Especially during the Witching and Devil’s Hours! Thanksgiving Day is a focal point for non-corporeal Native American rage because it represents a broken compact of trust and friendship between Europeans, and Natives.

During the days before and after Thanksgiving, including the day itself, it would be best to steer clear of any Indian burial grounds, battlegrounds, or anywhere indigenous Americans were rumored to have lived or died in.  Unfortunately many of these places are lost to history, and your home or business could in fact be at ground zero for the coming Indian ghost onslaught.  You’re in particular danger if you have any European blood coursing through your veins! If that’s the case then your best bet is to celebrate Thanksgiving in a manner respectful to the spirit of the holiday. Be sure to hang up decorations that display unity between Pilgrims, and Indigenous Americans.  And of course have a hearty festive feast chock full of the traditional dishes including the iconic turkey.  Most importantly be sure to give thanks to the Lord of your choice and ask for protection against the rightfully vengeful Native American spirits. If faced with a vengeful ghost who pegs your ancestors as atrocity makers then plead for forgiveness and make it clear you don’t condone their behaviour. Hopefully this will ward them off! Have a Happy and Safe Thanksgiving!