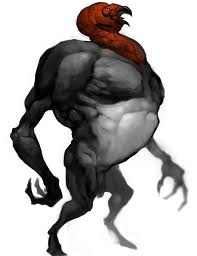 The odd paranormal being known as the Gobbler Ghoul first became known in 2011 when a remote turkey farm became ground zero for a new breed of ghouls.  A nefarious farmer severely mistreated his turkeys causing them to cannibalize their fellow turkey kind.  Cannibalization in humans leads to one becoming a ghoul. However in animals this usually doesn’t occur.  Despite this the surviving group of gobblers became a very disturbing breed of ghastly ghoul never seen before. The grisly Gobbler Ghoul was most likely created due to the farmer practicing black magic in an effort to increase the size of the turkeys for the purposes of petty profits.

As with all ghouls they only crave the dead flesh of their own species which means they really want your Thanksgiving turkey, and they’ll do anything to get it!  They destroyed the black magic farmer who stood in the way of their escape and they’ll horrifically eradicate any person, or animal, that stands in the way of getting their sharp claws into your scrumptious Thanksgiving dinner!  In particular be sure to keep a close eye on your dogs and cats as they may be the first target of this terrifying turkey of torment. Although members of the paranormal community fought to exterminate this macabre menace they are very speedy, strong, and elusive in nature.  One aspect of the dark magic is the fact that they only come out on Thanksgiving.  The rest of the year they hide away in a dormant state.  A good number were destroyed by supernatural hunters while the Gobbler Ghouls lie in this motionless state. Often found in dense bushes bordering farmlands.

The Gobbler Ghouls have a sinister demon like intelligence, glowing red eyes, and razor sharp claws! They even walk upright on their hind legs with amazing ease!  These monstrous mistakes of magic make the classic “gobble gobble” turkey sound except it’s more guttural and echoing in nature.  The bellow of this blasphemous beast will definitely send a chill up your spine! They loathe sunlight so Thanksgiving morning and evening is the most dangerous time but they still could crash through your window during the day to devour your turkey and maim anyone at the table.  Especially if your house is in a wooded area providing plenty of shadowy shade. We recommend having a Priest bless your turkey as religious artifacts (holy water, crosses, etc) will work to repel the Ghoul to some extent due to the demonic aspect of the dark magic which created them.  Unfortunately these methods are not guaranteed to work since their DNA isn’t truly demonic in nature.  Have an ax near the table so you can try to behead the beast.  That and incineration in fire are the only sure ways to destroy this diabolical Thanksgiving threat. You could always shove it in a stove to cook for dinner. Unfortunately the meat tastes rather wretched and the side effect are unknown! Despite this we hope you have a Happy Thanksgiving!