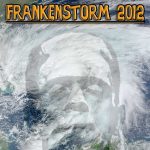 The next three days could prove fatal for many as the dreaded Hurricane Sandy makes landfall along the upper coast of the United States, and shapes into the most stupendous storm seen in 500 years!  The infamous fantastical Frankenstorm of Halloween 2012.  It’s no coincidence this is happening on Halloween in 2012 on the eve of the Presidential election as well.  Predestined forces of evil coupled with practitioners of nefarious magic are responsible for this amazing confluence of meteorological events that are forming the perfect paranormal storm.

The odds are astronomical that we have a Hurricane heading up the east coast while a high pressure front over the Atlantic blocks it’s path out to sea.  Then on top of that we have a cold front heading in from not only the west but also from the Arctic north as well.  This volatile weather cocktail is the recipe for disaster as dictated by the denizens of diabolical intent.  There’s just too many coincidences here for this to be natural in nature.  Our supernatural sources indicate that this storm is the brainchild of the plutocratic forces of evil, aka the Illuminati, who are utilizing a set of Satanic Sorcerers who in turn took advantage of the 2012 Galactic Alignment power boost available to most paranormal beings. This alignment of evil not only increases powers but also increases weather conditions to a small extent.  The devilish Sorcerers are also in league with demons, and some evil Gods to cause this hellish storm, and override any neutralization efforts by Mother Earth Gaia, or any other nature Gods.  Angelic forces will probably not intervene since they are bound to not interfere on a major level until the coming of Armageddon.

This storm is expected to rain Hell down on the good folks of the upper east coast as far inland as Ohio.  It could include torrential rains, floods, tornadoes, gale force winds up to 115 mph, hail, sleet, snow, blinding blizzards, and a large scale devastation that the forces of evil will eat up for breakfast, lunch, and dinner.  However the mere glee of death, and destruction felt by the malicious monsters who wield great power isn’t the only reason for this.  Firstly, it is a mass sacrifice to the Dark Lord for those who worship him, and gain his dark power.  Secondly, it will ruin Halloween for millions in the number one Halloween nation on Earth.  Trick O’ Treating marshals the forces of innocent childhood magic to combat the forces of evil that marshal on All Hallows Eve.  Thirdly, the nefarious powers that be wish to see Barack Obama re-elected as he has proved his loyalty to the plutocratic powers, and is their most faithful US servant ever.  For them he fulfilled the promise of hope, and change.  That’s not to say Romney is some paragon of goodness but he would be far less destructive for the United States which is the main tool for the plutocratic elite power structure on this Earth.  The region where this supernatural storm will hit has the largest populace of affluent people who would most likely vote Republican.  There would also be an excuse to postpone the elections as well due to mass power outages, and the sheer difficulty of people getting out to vote.  Amid the chaos voter fraud could run rampant.  It’s also a great testing ground for martial law, and the suspension of Constitutional rights which often takes place in emergencies situations despite the fact there’s no such clause in the US Constitution.  This martial law could easily be used as a tool to control who gets to vote.  This storm also distracts from the real issues of the election, and gives Obama tons of good PR.  Clearly the forces of evil are making a major play here as we head into the dark damnation of the dreaded 2012 winter solstice!

During this storm expect to find the early arrival of the monstrous Yeti, aka Abominable Snowmen, in the midst of blizzards along with a plethora of other paranormal creatures looking to capitalize on the mass carnage.  Especially vampires, werewolves, and ghouls who are already crazed due to the Blood Moon, and Halloween’s mystical hold over all things supernatural.  Evil practitioners of magic will be afoot as well doing their part to strengthen the storm, and also looking to raise corpses from the dead to initiate a zombie apocalypse so they can make a big name for themselves in the paranormal community.  We’re also already getting reports of beached mermaids, and even mermaids being blown through the air inland.  If you find one try to help it back to the sea, and don’t call governmental authorities or the media because we fear what will happen to these gentle sea souls in a top secret lab somewhere.  If the mermaid appear monstrous, and strikingly beautiful on their human like upper half then stay away as they’re another breed of evil Mermaids created from demonic evolutionary tampering.

We recommend evacuating dangerous zones as reported by your local weather, and being ready for any paranormal creatures to pounce as you travel to safety!  If you can’t bear to leave your home then barricading yourself in while under the protection of a powerful practitioner of magic would be the best approach.  Contact your local witch or wizard for details on weather protection spells.  In the meantime the forces of good are scrambling to counteract the Sorcerers, Demons, and handful of Evil Earthly Gods who are responsible for this potential atrocity.  Good covens of witches along with all practitioners of white magic are converging, conjuring, and contacting Gods, Goddesses, and even Angels to aid in their quest to save humankind.  Goddess Gaia has been difficult to reach lately, and she might be our best hope to stop this freakish Frankenstorm before it’s havoc is fully unleashed upon the innocent citizens of the east who just want to enjoy Halloween, and vote for the President of their choice.