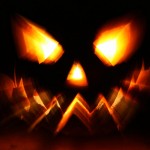 As Halloween approaches the notoriously nefarious Jack-O-Lantern Monster has been spotted numerous times popping up his big round pumpkin head around the globe.  The blurry photo to the left is the only known image of this dangerous denizen of darkness.  Obviously the person who took the photo is no longer with us.  God bless their soul!  This monstrous master of malevolent mayhem was once an extremely evil human named Jack Smith who lived in 18th century Britain.  He was far eviler than any legends you may have heard related to the origins of the Jack-O-Lantern.  He was in fact a serial killer who had an iron will, and would often declare he would depose the Devil, and rule over Hell when he died.  This despite the fact there was nothing supernatural about him, and he was not into any dark magics.  However he had attained an amazing level of consciousness most humans don’t achieve though the force of his own will.  He was beginning to access the pure thought matrix that is the foundation of our reality.

This is one of the few times in history where the Devil saw a human as a threat.  Jack was of particular interest due to the fact that he had no paranormal lineage, and had nothing to do with the supernatural.  Although Jack had run into various beings such as ghosts, poltergeists, vampires, and werewolves.  He amazingly could not be taken down or be scared by any of him.  His evil force of will was of such a sheer magnitude that nobody was a match for him.  The Devil tried to contact him in non-corporeal form but he simply called him a coward for hiding in the higher dimensions, and told him to be a real man in order to have a face to face meeting.  The Devil cannot take his natural biological form due to Angelic forces stopping him but he can possess people.  However it is difficult since he’s quite a target on the Heavenly radar.  So he performed a rare possession in the form of a beautiful woman in the hopes of beguiling Jack under his or her spell.  In reality the Devil is neither male nor female since he’s one of the original Archangels created by God.  Only human Angels have gender.

Jack was unimpressed by the allure of the the feminine Devil, and attempted to kill her when she tried to make him a deal to join the demonic ranks in Hell.  Jack said no since he was a free independent spirit of darkness the likes of which the Devil had not seen in a very long time.  The Devil did not admit it at the time but he was fearful of Jack actually taking over hell, and his invitation was actually a trap which Jack did not fall for.  Unfortunately for Jack it was the first time he was defeated since the Devil is the master of all evil even in a human female form.  Jack laughed maniacally as he wiped blood from his mouth after his brief battle with the Devil.  He had been prepared, and had a trap set for the Devil the entire time.  The entire room of dark wood, dimly lit with a candle, was carved with dozens of religious symbols including those of Christianity.  He had painstaking done it over the course of a decade so the Devil would not notice in case he was watching.  These symbols where prominently crucifixes that caged the Devil in the room, and within the human body he was in with no way to call for the help of his demonic minions.

Jack had done his research, and knew that killing the woman would only release the Devil into his non-corporeal form.  So instead he began to call upon Angels to collect the Devil in exchange for passage in to Heaven as the bounty payment.  Once an Angel he planned to use that power to magnify his own overwhelming evil, and descend into Hell to take command.  However he knew that plan might not work as he wasn’t sure of the complete workings of the Heavens.  The Devil was actually scared of his existence being snuffed out by Angelic warriors so he agreed to Jacks demands.  Jack wanted demonic protection so he wouldn’t be blinked out of existence upon his death which is what happens to evil people who choose not to become Demons.  He did not want to be under the thumb of the Devil nor did he really want to rule over Hell.  So that was a big bluff just to lure the Devil to him.  He simply wanted to be left alone to his own dark devices forever.  In essence whether he knew it or not he wanted to be a Traveler which is a free spirit who can go anywhere in the Universe.  Naturally Jack was not aware of this.  So Jack wanted to have the same protections as a full fledged Demon yet be free of Hell at the same time.  Besides Hell, and Heaven he really knew not what existed outside the planet Earth.  His plan was to live forever, and explore the Earth continuing his reign of terror for all eternity.

The Devil made a deal with him, and under Universal law he is bound to keep his word.  The Devil did of course use tricky wording on the contract signed in both of their bloods.   jack asked for immortality, invincibility, and amazing powers.  The Devil said immortality was easy but that nothing could be truly invincible in this reality so there was no guarantee on that request.  Also there’s only so much power that could be stored in a human, and it would require demonic DNA.  Jack decided against the powers, and knew the Devil was bound to tell the truth.  Normally one is required to surrender their soul to make such a deal but the Devil just wanted to be free, and he also figured out that Jack was one of the few humans born without a soul, or more precisely he eradicated his own soul though his own evil without even knowing it.  So Jack finally released the Devil, and he lived a life of creating a Hell for anyone who crossed his path.

Jack eventually traveled to America during the Revolutionary War to enjoy the carnage.  After that he continued on his spree of murder, rape, torture, and other atrocities.  He was finally taken down by a powerful coven of witches who called upon Gods, and Goddesses for power.  Jack had only asked for protection from Angels, and really didn’t believe other higher dimensional beings existed.  He was lit ablaze with magical flames in a pumpkin patch on Halloween night in his final battle with the brave white witches.  That should have been the end of him but the Devil had a contract to keep.  He also had no wish to see such an evil extinguished.

Despite having no soul Jack still had a consciousness saved by the immortality clause in the blood contract.  The Devil imbued his soul upon a pumpkin in the patch which formed a hideously monstrous face upon it.  He then grew a body from it’s DNA in a way similar to the Great Pumpkin Demon.  He then lit his head, which appeared to be a Jack-O-Lantern, with an eternal unholy flame warning all that he was under the protection of the Devil yet not an official demonic minion of Hell.  Jack was beyond enraged when he awoke in his hideous new fruity form with a giant pumpkin for a head wearing a drab burlap sack from a scarecrow nearby.  The Devil laughed maniacally, and said,”You wanted immortality so you have it Jack!”  Jack actually begged to be let into Hell to become a demon but the Devil denied him, and said they had a contract to keep which stated Jack wanted no part of that afterlife.

Jack’s dark will couldn’t cope with his new body which was designed to trap his powerful consciousness.  He was never able to escape to the great beyond of freedom.  He also couldn’t power it without the Devils flame within his new orange skull.  This hellishly mystical flame can only burn on Earth during the 13 Nights Of Halloween so Jack is damned to being in a paralysis like state for most of the year while still conscious of his surroundings.  Where he rest nobody knows.  However during these 13 nights of terror he roams the Earth at will ready to release his rage upon the world.

Since the Jack-O-Lantern Monster is not demon nor falls into any other category he is simply classified as a Monster.  This means the usual supernatural countermeasures, and eradication methods will not be very effective as it would for the demonic beings who normally infest the nocturnal shadows.  He is however disgusted with his own ugly appearance, and will generally avoid homes with lit Jack-O-Lanterns prominently on display.  Legend has it that seeing his own image in a mirror sends him running into the night screaming like a demonic baby.  So having plenty of lit pumpkins around your house, and carrying a mirror around with you would be in your best interests.

He is beyond dangerous with super strength, speed, agility, and the power to shoot unholy flames from his horrific pumpkin face.  These flames come from the Devil himself and not even holy water can extinguish it nor can holy fire neutralize it.  However it can slow him down to an extent as it causes a minor disruption in his energy base.   There’s no known way to finish him off but clearly powerful witches wielding the power of the Gods, and Goddesses might be the best path to at least repelling him.  If you spot him you’re already gone from the world.  Sorry you weren’t able to whip your mirror out in time.  You sure won’t even have time to call us or other supernatural warriors for help.  Just feel secure in the knowledge that your untimely demise was not in vain for we shall investigate, and pick up on the trail of the Jack-O-Lantern Monster.