Posted on August 7, 2013 by Xavier Remington 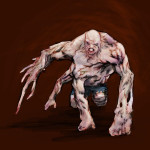 We are issuing a Splinter Man Warning for the greater Northern India area due to several supernatural investigation organizations extrapolating his the pattern of his recent sightings.   This warning is of the utmost importance since he has not killed a human for at least a few months that we know of.  He generally goes on a serial killing spree which includes the complete consumption of his human victims which are always adults. Thankfully children should be safe from this monstrous menace.  It’s unknown why he doesn’t go after them.  Once his insatiable appetite is satisfied he hides out in deep wooded areas where he subsists off animals of any size.  Even those far larger than himself.  He is renowned for killing elephants, and then consuming them bones, and all!  His last known elephant kill was in southern India in 2012 where his raspy voice as recorded proclaiming,”Me likes duh phanter.”  His odd way of saying he likes elephant meat.  Once he’s had enough solitude with nature he returns to populated areas to let loose a ravenous rampage upon the innocents of the world.  Since he enjoys wooded areas anywhere near such a region is at higher risk.

The Splinter Man is an immortal deformed beast made of an odd magical combination of wood, and animal matter.  He was once a human wizard deep into the dark arts that literally bit him in the ass, and turned him into a wood monster-human hybrid.  His superhuman strength, sharp wood limbs, telekinetic, and mind control powers that only work within 15 feet of him, and the virus he spreads makes him a deeply deadly entity of evil.  That virus is known as the Splinter Virus which causes a human victim to transform into wood which eventually causes their painful death within weeks.  Even one splinter impaling a person transmits the virus.  So if one is fortunate enough to escape the Splinter Man alive he, or she may still have received a death sentence.  That is why it’s imperative that people do not go near the trail of splinters that this malicious monster leaves behind.  And he is deeply malicious, and intelligent.  He is taking his pathetic existence out on humans, and all life on Earth.

Despite his deformed limbs he can run up to 30 mph which is slow in paranormal terms but fast for humans.  Escape by vehicle or climbing up a tree are the best escape options.  He also avoids water so getting into the middle of a lake, or stream would work as well.  Since he is composed partially of wood he is vulnerable to fire, chain saws, axes, and other sharp implements.  Although he can regenerate his wood rather quickly.  Also water sprayed upon him drives him away, and in freezing temperatures it will temporarily petrify him which explains his aversion of colder regions.  If you spot the Splinter Man get away from him as quick as possible, and inform your local paranormal Investigators of the situation.

You can read more about the Splinter Man here.

I'm the President of Mystic Investigations. A private paranormal crime fighting organization out for supernatural justice in a world full of supernatural darkness.
View all posts by Xavier Remington →
This entry was posted in Cryptid, Monsters, Splinter Man. Bookmark the permalink.