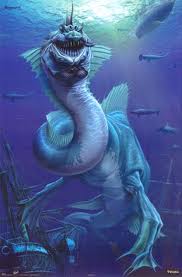 The Russians finally penetrated the ancient Antarctic ice Lake Vostok which has been isolated from the world for possibly millions of years.  Almost immediately large sentient serpent beings, that must have evolved under the ice, emerged with a murderous rage over the disruption of their delicate ecosystem.  We only know what their intent was, as they slayed many a scientist, due to top flight psychics informing us.  Apparently some of their own kind, and many ancient icy aquatic animals died once exposed to our worlds bacteria, and viruses.  However a good number of the snow serpents found that they could survive on the surface, and glide through the snow with ease while remaining in good health.  Somehow they derive oxygen from the snow as a substitute for the oxygenated waters of their dark ice ridden murky depths.

The mainstream media has yet to report on the Russian army currently battling these hellish beasts as they head to the Antarctic coast, and into the ocean to join their sea serpent brothers hell bent on revenge against humankind.  If you live on the coast of the ocean, particularly where there’s snow on the ground, or on large lakes connected to the sea you should be on alert for these 13 foot long behemoths coming ashore, and wreaking havoc.  There’s nothing you can do to stop them due to their extreme size, speed, agility, and diabolical intelligence.  If you spot one or more please run for your life, and contact the police who will get in touch with the proper government authorities.