Posted on February 29, 2016 by Xavier Remington 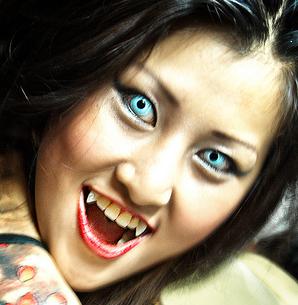 Chuang-Mu, the Chinese Goddess of Bedchambers, divorced her God husband Chuang-Kong some centuries ago, and decided to spice up her life by joining the demonic masses of the underworld.  Generally Gods, and Demons steer clear of each other but every so often they come to an understanding.  Chuang-Mu is now a rare Demon Goddess whose been on quite a destructive rampage for a great many centuries.  It took her centuries to curry favor with high level demons in order to be recognized with dark distinction down the blasphemous bowels of Hell! Her claim to fame are the Leap Days Of Leap Year within which her most sinister handy works take place.  That being the fabled February 29th that takes place every 4 years adding an additional day to the usual 28 days of February.

On that fateful day she materializes as a beautiful young Asian woman who finds the most innocent guys who were born on February 29th. It seems

their Birthdays are extremely powerful after not existing for 3 year intervals.  She feeds off the triple power of the Birthday Wishes, and increased spiritual birth energies. By the end of the day she seduces them with the ultimate intent on getting them to marry her in an unholy dark ceremony.  Once joined with the Goddess in unholy matrimony they disappear just before the stroke of Midnight on March 1st.  They are never seen again until the next leap day.  Her victims speak of the hellish years spent with the sadistic demon in a plane of reality beyond comprehension.  A place where time flows in such a way that the 4 years they’ve been missing is described as 400 years by Chuang-Mu victims. She feeds off their souls intertwined with her, and in the process gain additional power, and favor with the Archdemonic hierarchy.  Only on the next February 29th are the tortured men allowed to return for reasons not fully understood.  It’s thought that their physical body must stay alive in our physical Universe so she can continue to feed off of them before the die, and go to Heaven.  These men tend to lead very long lives yet at the same time are quite weak, and sickly due to the drain on their Chakra’s.

If a strikingly beautiful, and beguiling Asian woman suddenly shows way too much

interest in you we suggest getting away from her as soon as possible!  Especially if women have never shown much interest in your before.  It will be difficult for you to resist her charms since she will have you under her mystical love spell.  If you don’t believe it could happen to you, and insist on spending time with her then please at least gaze upon her image in a mirror.  You will see something like the woman pictured above with glowing sky blue eyes, and fangs.  Once you discover what she is just act natural, and don’t panic.  Then make an excuse to leave, and then run for your life.  Preferably to hallowed grounds or a church.  There a Priest can bless you, and you can stock up on holy water which will repel her to some extent.  Mint, and green tea leaves or oil are also a known repellent of this abomination of paranormal womanhood.

Do not attempt to engage her in battle because she has the combined powers of a Goddess, and a Demon.  Not even the professionals could expect to

do well in a war with her!   Only an Angel or higher God would be able to take her down with extreme prejudice.  The only weapon that will terminate her is a diamond dagger.  Clearly a rare, and beyond expensive item.  Yet one of the few things that can finish off a God or Goddess.  Of course a real diamond ring can cause some injury to her. Also keep in mind that she can materialize in 29 different forms to seduce 29 different souls all on the same day!   Usually in different cities around the world.  However eradicating one of her incarnations with the diamond dagger will in fact dearly depart all of her multiple selves.

When you say yes to her marriage proposal, and unknowingly partake of a dark wedding ceremony, you are in essence signing over your soul to her for

four years.  If you discovered after being wed that she is a demonic Goddess you can annul the marriage as long as it’s before Midnight on March 1st.  It’s also very important you not consummate the marriage with her as this intertwines your souls, and bind her to you directly.  Pray to your God of choice to annul the union. If that fails call upon her her jealous ex-husband Chuang-Kong by name. He may take pity on your pathetic plight, and grant unholy annulment.  Although he may smite you which would be mercy upon you rather than spending the equivalent of 400 years in Hell!

If you say no to her marriage proposal you will witness her true demonic appearance, and her unbridled rage.  However she is magically bound to

leave you at Midnight so you must evade her, and fight to survive until then.  Unfortunately if she’s already corrupted you through seduction in the bedroom in advance of the wedding then you will be plagued by 7 years of bad luck.  After that the dark luck will only rear forth on Leap Days.  So the bottom line is to avoid Chinese women like the black plague on February 29th leap days, and make sure you smell of mint or green tea as well.  She is bound by supernatural law to appear in an Asian form, or she will offend an armada of Gods who would then hunt her to extinction!  Even with her demonic protections!  Happy Leap Day & Year To Those Men Not Born On This Day!  To Those Males Who Have Been Born On February 29th Beware Of Chuang-Mu, The Leap Year Demon Goddess Of Leap Day Darkness!