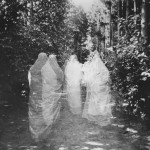 All Souls Day, also celebrated as Day Of The Dead, is a day energized by the previous supernatural event of All Saint’s Day.  Angels from the great beyond descended the day before to in essence clean up the messes that Halloween evil left behind.  Despite ascending to Heaven again a great deal of Angelic energy is left behind. This energy is eaten up by non-corporeal entities such as ghosts, and even poltergeists of a non-demonic nature.  Basically most of it is absorbed by dead humans who have yet to cross over to the afterlife of Heaven, and ascend to Angelhood status.  This may be due to unfinished business here, an unwillingness to let go of their life, a horrific death, or a generally hellish life.  They are either deeply sad, angry, or confused as to what has happened to them.  Once in our plane of reality they are naturally drawn to close family, and friends like a supernatural magnet.  So in other words prepare to be haunted!  Although hopefully in a loving way. 🙂

Once they take in the excess metaphysical energies they can more easily manifest themselves in appearance, sound, smell, and even some physical manifestations.  These could include objects moving about or the most rare of all an actual complete physical translation of their four dimensional ghost form into our three dimensional world.  So on this day it is very possible to find a dead relative standing before you as if they’ve been resurrected.  Unfortunately it will only last for this day, or possibly three at the most depending on their will power, and the amount of Angelic energy they absorbed.  Whether you’re visited by them in physical, or ghost form you must encourage them to move on to Heaven to begin their journey into eternity.  Many people will at least feel the presence of their fallen loved ones on this day, and they should speak out loud to inform them that it’s time to let this life go, and move on for their own good.  Many of these incidents will occur between Midnight, and 5 AM on November 2nd when supernatural occurrences are at their height.  Haunted houses should be hopping mad with activity within hours from now!  In some cases there might be occurrences in holy places, such as churches, and graveyards, between 12:00 AM 4:00 PM.

Speaking of graveyards beware of spontaneous zombies rising from their graves in the dead of the night.  In some cases if a ghost had nobody in their life they will be drawn to their rotting corpse.  It’s also possible for various paranormal wires can get crossed, and some people might re-enter their bodies with enough power to self resurrect themselves.   In rare cases they might remain self-aware by drawing on their ghost form rather than their zombie brain to interact in this reality.  However in the vast majority of these cases the person loses themselves in their rotted physical brain, and becomes a full fledged flesh eating zombie.  If this happens you will most likely be paid a visit by your dead zombie relative.  If they are clearly not self-aware then you know what needs to be done.   Just remember it isn’t them anymore, and most likely their second death will be the charm that sends them to the great beyond where they belong.

In some cases you might not be aware that a dead relative is actually still alive in living dead form as a vampire.  On this day they will be inexplicably drawn to you even if they left their human life behind.  It will override even their sire bond to the vampire who transformed them.  These visits can be quite shocking, and can go well most of the time but if the vampire is particularly evil due to his or her demonic DNA then be prepared to stake them in order to save your life.  Better yet utilize vampire countermeasures mentioned on this site to ward them off on this day of the dead.  This would be a great time to douse your food with garlic.  Worry about the offensive smell on November 3rd.  Old vampires with no human relatives alive from their non-living dead life will be drawn to their grave sites.  Some might even go mad, and dig up the bodies.

Some misguided individuals such as powerful practitioners of magic may actually try to resurrect the dead but there is sure to be a plethora of negative consequences.  Naturally if the person is evil they probably want to see a dark cloud of malevolence descend upon any happy humans in their vicinity.  Paranormal professionals, and good witches will be out in full force ready to take down these evil doers who delve into the dark magical hat of destruction!

In addition those who actually die on this day will be more likely to end up as a ghost so take care of yourself, and wait until tomorrow to die.  All Saints Day would have been a better day to die since there were so many Angels around to guide lost souls to Heaven.  In fact quite a few ghosts did end up going home yesterday thanks to Angel intervention.  Let us give a big round of applause for our Heavenly Heroes!