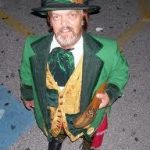 Leprechaun activity has been quite profuse this Saint Patrick’s due to the unusual influx of Clurichauns spreading bad luck, and mayhem about the world.  Ireland, Britain, the United States, India, China, and Australia seem to be the hardest hit by the Clurichaun scourge.  This increase in bad luck afoot may be due to the unlucky nature of 2013 itself.  Whatever the reason Leprechauns are working full time to neutralize the unlucky specter of evil that has flowed about this fine Saint Paddy’s Day.  Unfortunately this means less good luck this year as the Lilliputian fellows will have less time to perform the annual sacred rituals of marshaling good luck.  Good luck that infuses the entire year until Christmas when Santa Claus’s marshaling of the forces of good replenishes much needed luck until the next Saint Patrick’s Day.

So you will have a more difficult time this year locating the lucky Leprechauns in their usual locations frolicking about shamrock fields whistling Irish tunes, and giggling with glee.  However there’s always hope you will have a random brush with a Leprechaun, capture one, or get their pot of gold to earn yourself three wishes since they are out in larger numbers this year.  For More Information See Last Years Leprechaun Alert

I'm the President of Mystic Investigations. A private paranormal crime fighting organization out for supernatural justice in a world full of supernatural darkness.
View all posts by Xavier Remington →
This entry was posted in Clurichauns, Leprechauns, Saint Patrick. Bookmark the permalink.