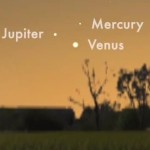 At dusk on May 26th, 2013, while the sky is still sunset lit in a kaleidoscope of colors, expect to see the terrifying trinity of doom which may appear to be an innocent celestial conjunction of three planetary bodies to most sky gazers.  However those of us in the paranormal community know it to be the Jupiter Triangle Of Death!  On Sunday evening you will witness the planets Jupiter, Venus (the brightest in the sky), and Mercury, at the apex, of a rare planetary triangle.  This astronomical event has supernatural implications which include the focus of energetic powers on Earth which may be utilized by dark practitioners of magic.

Although the planets motions are fixed, the planets themselves have souls who are Gods.  Like Earth, who has the soul of the Goddess Gaia, aka Mother Earth or Nature, interwoven within in it, the other planets have the souls of the Gods Venus, Jupiter, and Mercury.  Various mystics have confirmed that Venus, the Roman Goddess of Love, is having an affair with her half-brother Mercury, the Roman God of Communications and Commerce.  This explains why her jealously has been brought to such an angry level.  Clearly Mercury, and their Father Jupiter, King of the Roman Gods, and the Solar System, has compelled her to join together in an unholy alliance in a conspiracy against Mother Earth Gaia, and King Of The Greek Gods Zeus who has a great deal of pull among all Gods, and Goddesses on Earth.  In fact most end up ignoring Jupiter who is to have domain over the entire Solar System.  It’s somewhat akin to the TV show The Sopranos where Junior Soprano is made Boss but everyone knows the real Boss is his nephew Tony Soprano.  Jupiter is deeply jealous of Zeus, and the respect he commands.  Despite being King Of The Solar System the real power is on Earth where life resides while the rest of the planets are barren.

The lack of life on all the other planets, including Venus, is where her jealously of Gaia comes in.  Venus has always felt slighted for not having her planet full of life, and love like that of Earth.  Efforts were made to make this happen but not even Jupiter has the power to change the course of the planets to such a degree.  They are controlled by an unseen force.  Perhaps the Galactic God Orbislacteus but ultimately the Omniverse God most likely has charted a destiny for all in our Universe.  Mercury is known to be worshiped by various evil plutocratic forces who are at the apex of evil in the dark world of the supernatural that wishes to rule over Earth.  Although they derive most of their power from demons.   Mercury has never been a fan of his desolate hellish planet as well.  Now this unholy trinity of jealously has a celestial alignment to focus their combined powers on Earth in the hopes of overwhelming the souls of Gaia, and accessing her powers which they will use against Zeus in a ploy to take over rule of the Gods, and the entire Earth as well.  However even if they do that demons will probably swoop in, and take command from them by extreme force.  The plutocratic forces of evil are only using Mercury in another plot to seize total control over the world of the supernatural, and humanity as well.

In addition to this serious conspiracy against all of us there will be a general increase in paranormal activity including that of ghosts, and poltergeists.  These non-corporeal entities are already energies by the current increase in solar x-rays, and geomagnetic activity in the atmosphere.  There will also be many practitioners of magic who will use the rays of magical Godly powers showering the Earth for their own little nefarious plots to gain power, revenge, or whatever their little black hearts desire.  Some forces of good will also try to access the energy to fortify their positions, and prevent the Earth from falling into nefarious hands.  Be on the look out for dark Sorcerers, Warlocks, Wizards, and Witches roaming about the dark shadows of dust.  If you see odd people dressed in long flowing dark robes then we suggest running in the other direction or hiding until they’re gone.  These dabblers of dark magic are people you do not want to mess with!

I'm the President of Mystic Investigations. A private paranormal crime fighting organization out for supernatural justice in a world full of supernatural darkness.
View all posts by Xavier Remington →
This entry was posted in Astronomy, Goddess Gaia, Goddesses, Gods, Magic, Mother Nature. Bookmark the permalink.