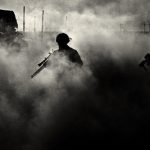 As we celebrate the sacrifice, and bravery of our nation’s military veterans, and fallen soldiers who died in mortal combat, let us not forget those who still haven’t found peace even in death. Those haunted by the atrocities of war who never walking into the warm white light of eternal Heavenly peace. Damned to roam the barren battlefields of histories horrors! Then there are those who fight for truth, justice, and the American way in the afterlife as spirits.  Warrior spirits who actively cross over from the great beyond to watch over those in need, or guide them in their perilous journey through the battles of life.  These valiant Guardian Angels Of Justice refused to allow death to be the end of their service to country, humanity, and God.

Since ghosts are often formed by violent death, it’s no wonder that warriors of justice, and defenders of freedom, could indeed be stuck like metaphysical molasses in the dream plane between life, and death.  It’s far more common for ghostly soldiers to stick around for a short time after

being slain in battle to see unresolved issues through.  Usually seeing a glorious victory, within the violent valiant military engagement they perished in, is enough to push them through the light into the heavenly realms in the dimensions above us.  However some are deeply traumatized, and confused by their astral state. An existence in which they may not realize that they’re being kept slightly out of phase with our reality by their own sub-conscious.  It’s up to the will of their warrior spirit, brothers in arms, and even paranormal professionals to guide them home to Heaven, and beyond!

Activity among these ghosts, and willing spirits is at it’s peak on military holidays across the world such as Veterans Day, and Memorial Day.  This is due to the human collective consciousness marshaling forth the metaphysical energies of their souls as our thoughts

steer toward the courageous men, and women of the armed forces.  These enchanted energies may fuel other worldly spirits in general but are more targeted toward those who died in battle, or perished while being haunted by their memories of wartime terror! These ghosts are generally of little risk to those who respect the sacrifice they made for our freedoms. So this Veterans Day let us commend, and honor those soldiers still among the living as well as those stalwart spirits, and ghosts still fighting the good fight for liberty here, and into the annals of eternity with the infinite multi-space of countless realities.