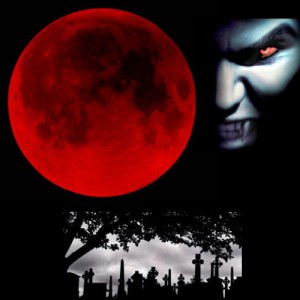 As the Halloween Blood Moon reaches 99% of full, vampires around the world are experiencing the annual blood moon fever which increases their blood lust exponentially until the moon goes back below 99% of full.  During these few days exercise extreme caution when going anywhere at night.  The normally reserved and cautious vampires will throw caution to the wind and go after you with a passion.  If you resist they will become beyond enraged and sink their teeth into you with a violent force that may possibly cause fatal damage.

Since vampires appear human most of the time they blend into human society very well.  They could be anyone and be anywhere you are.  So you need to look at everyone with skepticism, and be prepared for the unexpected.  Naturally you’ll want to steer clear of anyone who looks excessively pale from lack of sun.  Unfortunately this doesn’t help you out when it comes to vampires who originated from dark skinned ethnicities.  If you embrace someone and feel no heart beat then make an innocent excuse to leave them and start running once they’re out of view.  In addition lack of respiration is also a dead give away that a vampire or some manner of living dead menace is in your presence.

Of course the wearing of religious artifacts is a great way to repel these creatures of the night so you don’t have to deal with their dangers to begin with.  Wearing of cross or crucifix necklaces has always been a main staple of anti-vampire fashion  If they’re made of silver then they become even more effective.  You could wear garlic oil or actual garlic but that wouldn’t make you too popular in social circles.  Washing clothing in holy water in advance of going out has been known to have some level of vampirical repellent properties as well.  Although you should always carry a vile or squirt gun full of holy water for your protection.  Just head down to your local church and stock up now before the annual Halloween holy water shortage takes place.

If you think you’ve seen a vampire, then don’t hesitate to contact your local vampire slayer, vampire hunters, or paranormal investigators for help.  Just don’t bother with ghost hunters because they will be ill equipped to handle a vampire.  If you’re cornered with no escape and they’ve revealed themselves with the manifestation of the tell tale glowing eyes, and fangs, then it’s time to fight for your life.  If the repellent measures previously mentioned fail you, then you will have to eradicate the supernatural menace.  Please refer to our article where we answer the age old question “How Do You Kill A Vampire?“.

If you fail to finish the filthy fiend off then he or she will plunge their fangs into the arteries within your neck, and begin to drain your precious life giving blood.  It’s doubtful they will stop and spare your life during the blood moon fever that sends all rationality to the four corners of the Earth.  It’s also not likely they will stop to bring you across into their eternal evilness.  If by some fluke they do, there’s not much you can do.  You will be unconscious from the blood loss and they will drain some of their blood into your mouth thereby exposing you to the paranormal vampire virus which will in turn transmutate your DNA into demonic vampire DNA.   You may awaken anywhere including a morgue or buried in a grave.  Just know that all is lost and may God have mercy on what’s left of your immortal soul.

If you must venture out past dusk then stay in crowded areas and don’t be alone with strangers.  Hell just don’t talk to strangers for a few days!  Especially avoid night clubs, taverns, or anywhere people go to meet the opposite sex because that is where vampires usually go on the prowl for blood.  Be wary if a handsome guy or hot chick comes on to you a little too strong.  Especially if you’re not that great looking to begin with.  Odds are they’re a vampire and they like the aroma of your blood which they can smell from several feet away.   That’s not to say there aren’t some creepy ugly vampires out there but as a general rule the transformation into vampirehood alters facial features enough to make the ugly look good.  Some are so evil that their appearance indeed supports their true nature.  Just be on your toes during the blood moon, and don’t fall under the hypnotic spell of a blood thirsty vampire.  The minute you feel your mind slipping away into their mesmerizing eyes is the minute you need to leave the premises and run as fast as your foolish feet will carry you!