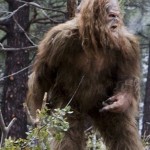 There have been numerous Bigfoot sightings in various forests around North America.  This is the time of migration to southern forests since the Sasquatch doesn’t like winter.   Despite it’s thick coat of fur it doesn’t like the extreme temperatures, and blizzards that winter brings.  Be on alert for them crossing roads by night along with deer as well.  If you live near a large track of woodland take care to not get in their way.  Although normally docile they can get violent if they feel threatened.

The danger is increased during the time around Thanksgiving due to the rampant onslaught of revenge filled Native American spirits afoot as mentioned in a previous post.  The Sasquatch has always had a mystical kinship with Native Americans, and they to feel the pain of past atrocities forced upon the Indians. At times a spirit will briefly possess the Bigfoot, and use him as a tool of revenge.  So it’s especially important to avoid contact with the tall hairy creatures.  If you run across a Sasquatch then avoid eye contact, and back away slowly.  Notify your local paranormal professionals to alert them that a Bigfoot is afoot so they can take the appropriate action to warn others.

The Sasquatch is immune to all magics, and various protections against the paranormal.  Avoidance, and calm behavior are your only defenses.