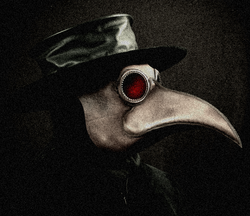 Plague doctors had been an interest of mine for years before I wrote the book The Curious Case of the Tuscan Plague Doctor. After its completion, I wound up becoming somewhat of an expert on the subject, and I think plague doctors have a bad rap. The image of the beak-nosed doctors has evolved into a symbol of death—the very thing they were trying to prevent! But considering the hideousness of the masks they wore, it’s not really surprising.

The plague doctor’s mask—as well as the rest of his gloomy attire—was invented by Charles de L’Orme, chief physician to King Louis XIII, in 1619. The masks were made of either thin leather or heavy, stiffened cloth. The beak portion was approximately 6 or 7 inches long. The eye holes were protected with red-tinted glass, presumably to frighten away evil spirits. The rest of the doctor’s attire consisted of leather trousers, shirt, boots, and gloves, with an overcoat made of heavily oiled canvas-like material. (The Following URL Has Vanished! Contact The Author Here If Want To Read The Rest Of This!)  Read The Rest Of The Story At The Weird World Of C. L. Hernandez…

"The Enigmatic Plague Doctor", 5 out of 5 based on 1 ratings.

We love all things Halloween! Whether it's glee of trick o treating, the iridescent allure of the autumn season, or the spooky mystique of supernatural beings. Enter the world of Halloween all year round on our All Hallows Blog.
View all posts by Halloween Haunter →
This entry was posted in Plague Doctor. Bookmark the permalink.